We've already talked a bit about it — the weather is what pilots fear more than anything else. We are allowed to fly through clouds (IFR, instrument flying) but there are limits to this, as below 0°C ice forms on our aircraft which can quickly become a major problem. We can fly below, above, beside and through the clouds, provided they don't cause icing. Before taking off, we would like to know the odds of reaching our destination as planned. It would be unfortunate if we came to realize en route that we have to turn around due to icing or make a major detour. In general, we will only take off if we know that we can land safely, i.e. there are a few inches of clear air between the cloud base and the landing strip. Our certification only requires us to have 400 meters of visibility and 200 feet (60m) between the clouds and and the runway but we don't want to get even close to such conditions — this is only for pilots that fly frequently and are well trained in such conditions. 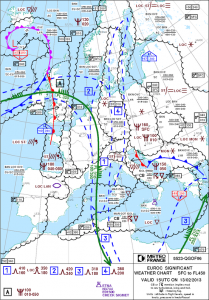 There are regular weather reports for pilots, those report actual conditions at the weather stations and therefore are very reliable. Larger aerodrome have a system which every 30 minutes determines visibility, cloud coverage, temperature, dew point, pressure, etc. The weather of the future is an entirely different animal. Meteorologists (similar to fortune tellers) specialize in asking their crystal balls (read: expensive computer models) for aviation weather which not only covers the surface weather but also conditions at higher altitudes. Everybody knows that predictions are hard, especially about the future. Some weather conditions are easy and reliable to predict, others almost impossible. Fog formation is an example of a weather phenomenon that until today, meteorologists don't grasp as it depends a lot on local conditions which are not accurately represented in the computer models. Our start aerodrome is ideally situated and only very rarely a victim of fog. Another aerodrome just a few miles away is basically covered in fog throughout the winter. 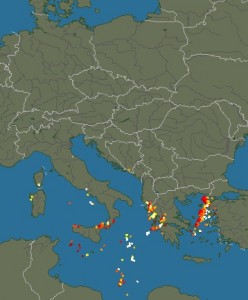 A private pilot knows a few basic things about weather. There are lows and highs. In low pressure areas, air ascends, condensates and forms clouds with rain or snow. In high pressure areas, air descends, stabilizes and we get clear skies. High is good, low is bad (incidentally, that's also Markus's attitude towards life). Even worse are fronts, those are the boundaries of air masses with different characteristics. There are cold and warm fronts. Especially cold fronts are evil as they produce thunderstorms, strong rain and reach up very high with severe icing. We definitely don't want to fly through a cold front, that's for cowboys. In the above map from the French Met Office (yes, smart pilots collect data from all over the world because instead of having one decent European Met Office, we have a zillion of mediocre national weather services doing exactly the same thing) we see the weather from today 16:00 UTC (Greenwich Mean Time or Universal Coordinate Time, used by pilots all around the world). Over Croatia, there is a cold front (blue line with teeth), moving east with 15 knots and northwest of it a small warm front (red with semi circles), moving to Italy. In the area of the cold front we expect thunderstorms, let's check this with the current lightning chart (sferics) shown above.

Indeed, there are thunderstorms (the yellow and red dots) and this is a no-go zone for us. However, the front is moving and by tomorrow it will be a Greek problem (don't they have enough already?). Let's have a look at the forecast for our destination aerodrome Dubrovnik, the Terminal Aerea Forecast (TAF):

A bit cryptic but in order to be able to read that, pilots attend ground school. We can see that today (Feb 13) between 12:00 UTC and 21:00 UTC there is supposed to be rain (RA). Yes, that fits to what we've seen earlier. The rain is going to stop at 22:00 and only a feeble wind (7 knots) coming from south (180°) will remain. Everything that could be bad for us like thunderstorms, rain, snow, storms would be listed here.

Now let's look at the TAF of our start aerodrome Heubach (EDTH). Unfortunately Heubach does not provide its own weather but we have the large airport of Stuttgart (EDDS) just around the corner and can use its forecast:

Also looking good. Very little wind (3 knots) from variable directions (VRB), good visibility, scattered clouds 4000 feet above the airfield, a little bit of snow with 40% probability and some fog between 12:00 UTC and 22:00 UTC combined with low clouds. After that until the end of the forecast period on Feb 14 at 13:00 UTC only good weather. Fantastic. 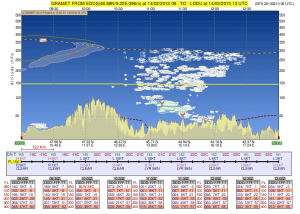 So it's looking good in A (Stuttgart) and in B (Dubrovnik), but what about the weather between A and B, that's a full 1000km? Here, we resort to a larger scale forecast model based on the Global Forecasting System (GFS), the weather model of the USA which, in contrast to the semi-capable European systems, is freely accessible (in the USA, all data produced with tax money is generally freely available, something the Europeans should take a closer look at). Here a very nice rendering of our flight profile from GFS for the planned time of flight.

This is really good. The yellow line is us at flight level 150 (15 000 feet, ca. 5km). Below you see the topography with the Alps and Dubrovnik at sea level. The dashed red line is the zero degree line which is currently at the surface in Germany and 5000 feet in Dubrovnik. In the middle you can see areas with a green shading meaning moderate icing (which in reality is quite serious with our little plane), however well below our planned altitude. There you also find clouds but they are broken, i.e. we will find our way around them. The temperature at the planned altitude is forecast between -19°C and -22°C so we hope our heater will work and we won't regret boarding the aircraft in our Egyptian beach wear. 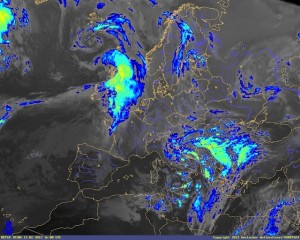 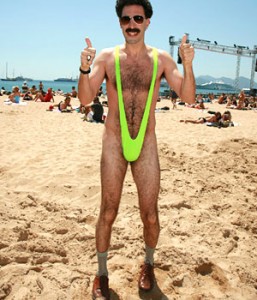 Another interesting image is the infrared satellite photo. Using a color scale it shows the temperature of the cloud tops. Given that we have temperature data for many places on the surface and a rough idea about how air cools with altitude (the standard model assumes 2°C per 1000 feet), we can roughly estimate the top of the clouds and know which clouds we will be able fly over, fly through or (as we prefer) circumnavigate. This is a current picture, by tomorrow the nasty stuff will be gone because it's directly related to the high reaching cold front.

In summary: gorgeous weather. Markus can return his $19 Easyjet ticket that he purchased earlier. Oh, there are no refunds with Easyjet!