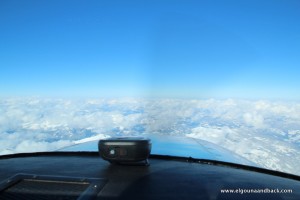 This trip went way too smooth. Neither technical nor any other problems lead to the desasters that our scandal loving readership expected. After an additional day of spa wellness in Dubrovnik, the stars promised luck for today's leg home. Few clouds enroute, mostly blue skies north of the Alps and a broken layer of clouds at our destination. The icing on the cake was a strong tailwind so we were convinced our last leg was going to be a home run.

The first two hours were just like we expected, maybe a few clouds more than forecast but 30 knots of free thrust from behind. North of the Alps no clouds, just a bit of mist. Starting at the Danube Valley the situation changed completely: an overcast cloud layer at about 8000 feet and a bit later another layer of clouds on top. We continued to our destination Heubach (50km east of Stuttgart) at 10 000 feet, hoping to find a hole in the clouds allowing us to change from IFR to VFR (visual flight rules). Our backup strategy was to continue north to Schwäbisch Hall, slide down the ILS (instrument landing system) through the clouds and continue visually to Heubach. 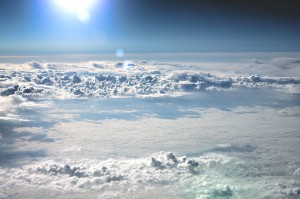 Overhead Heubach we had a short discussion with Jörg Lohmann on the tower and it was clear that we would not land there today. So we continued to Schwäbisch Hall. The colleague there just told us "forget it, 400 feet cloud cover, no way to make it to Heubach". Not great either.

So on we go to Stuttgart, still reporting a broken cloud layer 1200 feet above the runway. Stuttgart Airport is not cheap but from there we can take the metro. Air traffic control was very supportive and allowed us to continue at 8000 feet (outside clouds) to the instrument landing system of runway 25 in Stuttgart. When it was time to descend, we saw once again an overcast cloud layer which appeared to be rather thick. We could descend through the cloud layer but would pick up some ice and might have a problem if we have to go around. We were allowed to hover around the airport looking for the reported holes and the controller asked airplanes in the vicinity for holes but nothing. The controller on the tower of Stuttgart also reported an overcast layer. The weather report for Stuttgart was definitely wrong which is quite scandalous as pilots have to rely on it.

Now we were out of preplanned options and had to look for something else. We had good weather coming from the south and it was getting worse the more north we got so we had to return south. The DFS controller was extremely professional and first asked for our endurance to judge the options and urgency. 3.5h so no problem at all. We discussed possible aerodromes, contacted Mengen but were told there is the same overcast cloud layer. While discussing other options, the controller contacted us and told us he spent some time phoning airports and recommends Friedrichshafen (EDNY, Lake of Contance) with blue skies. This was the perfect solution: only 20 minutes away, fully equipped with an instrument landing system, excellent infrastructure, customs and reasonable prices. So we continued to the beautiful Lake of Constance, were put on the ILS runway 24 by Swiss Air Traffic Control and landed with excellent weather. The aircraft was tied down, we passed immigration, had a little snack and reevaluated our options.

We did not expect conditions in Heubach to improve today and the short jump to Stuttgart would help much (other than increasing the cost). So we got a rental car and took off to Heubach where Markus's car is waiting in the hangar.

The real final of this journey will be in a few days when Achim takes the train to Friedrichshafen and brings the Cessna home to its hangar in Heubach. By this time, Markus will be sitting in his cube farm working on support tickets.