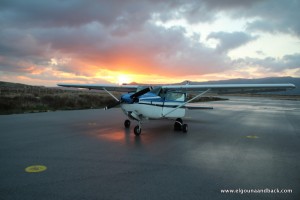 The third day and last day of our onward journey to El Gouna in Egypt. After the tempestous welcome in Stitia yesterday, the weather had calmed down today and were were able to take off as planned at dawn. Today we wanted to continue South from Crete over the open sea. Before takeoff, we ensured that our life raft and emergency equipment was well stowed and easily accessible in case of a water ditching and we put on our life vests during the whole flight. For about two and a half hours there was nothing but blue below and above us. The air traffic controllers of Greece, Cyprus and Egypt cooperated well and got us a few shortcuts to reduce the time over the open sea and save some of our precious fuel. 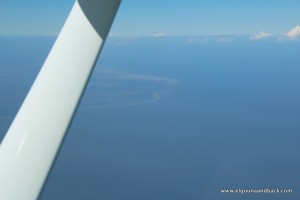 The landing in Port Said was smooth and uneventful (not to be taken for granted with Achim piloting the airplane). However, it got more interesting after that. Right after we had turned off the engine, three strange figures approaches us. While one of them took our passports and disappeared with them, a 2 meter guy type Faceman (A-team) tried to sell us jet fuel (kerosene) which our aircraft can’t make use of — it needs something similar to car fuel. When confronted with this, he offered a discount on his fuel but unfortunately we did not reach an agreement. Then we had to go to immigration. Even though it’s called “Port Said International Airport”, there are no international flights and the immigration officer had to come in from the city center — Ahmed had arranged for this and thereby saved us at least 3 hours! In a small, dark office our passports where examined thoroughly, a visa was inserted and lots of forms filled out before they let us go back to our aircraft. We then started to syphon the fuel from our jerry cans to the aircraft’s main tanks until we were ordered to immediately stop doing this. During refueling, the fire brigade must be present and therefore we shall stop. The fire brigade then arrived with a monster truck and was waiting with the engine running while we completed our fueling. Then we got in trouble once more: our agent Ahmed told me to come with him because I had taken unauthorized pictures at the airport. A grim looking office accompanied me to a side building — as we then learned the office of the airport manager. 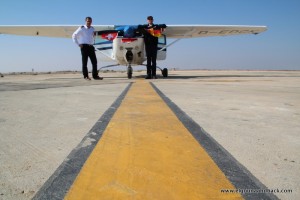 They closed the door behind me and 5 serious looking officers were standing in a row and ordered me to sit down (more explicitly when I tried to stand up). Ahmed served as translator and explained with a lot of excitement that around the airport were military installations and it was prohibited to take pictures. I had to show all pictures on my camera to the 5 uniformed officers until they started to discuss my fate in Arabic. I thought that I might end up in Egyptian prison due to espionage (Egyptians jails do have quite a reputation) but after a few minutes of discussion they sent me out again — with strict orders to not take any more pictures. Of course we complied (even though Achim was convinced he could complete the trip successfully on his own and thought that Markus could use some time for meditation and the Swiss Consulate would take appropriate care of him). Landing, securing our refueling operation and immigration were all completely free of charge — thanks to Ahmed!

Back at the airplane, Achim had completed the refueling and had our passports with the visa stamps back. We had successfully passed Egyptian immigration. With a Cessna! Not a lot of people have done this before. 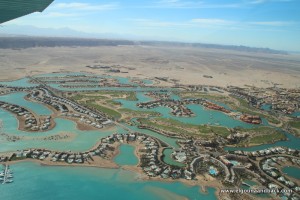 As a small thank you for his help, we took Ahmed on board and left Port Said for El Gouna (north of Hurghada on the Red Sea). A wonderful flight led us along the Med’s coastline via Cairo, the desert and then along the Red Sea’s shores to our destination. Radio coverage over the remote areas was quite bad so that we lost contact with air traffic control. Thanks to a Condor crew that relayed our position reports, we were able to stay in touch.

After two and a half hours we started our descent into El Gouna with a few orbits directly overhead the city. The landing (or should I say the 5 landings) were again gusty and rather hard — but we’ve made it! From Heubach near Stuttgart about 3800 kilometers (2000 nautical miles) in three days over the Alps and 10 countries to Egypt. Now we will spend a few days relaxing in the sun and enjoying water sports before we head back mid next week. We promise to keep you updated.