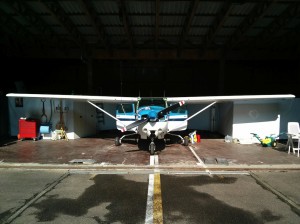 Now we can really consider this trip to completed successfully. Our Cessna is well and back in its home hangar and both pilots are alive. Who would have thought that? When we could not complete the approach into Heubach with visual flight rules (there is no instrument approach unfortunately) and decided against landing in Stuttgart, we had to park the Cessna in Friedrichshafen at the Lake of Constance. Today it was time to bring back the bird. When the mission is to get up early on a Sunday and take responsibility for an important task, it is clear that Achim has to step in. Markus was still trying to sober up from yesterday's binge drinking before getting up for his kebap breakfast at 12 o'clock in Stuttgart. Achim boarded the metro at 08:34 and arrived at Friedrichshafen Airport around 11 o'clock where it was still cloudy, unlike in sunny Stuttgart. To great surprise, the airport was vibrating as it recently has become the hub of ski fanatic Brits: three airplanes from London all arriving within one hour!

The flight back was just a short hop of 30 minutes and after takeoff lead us south west over the Lake of Constance, climbing through the clouds to blue skies and on direct course to Heubach. After landing, the Cessna was stored in the hangar and tidied up a bit. The real interesting question is how we are going to get rid of the Sahara sand which was pressed into every corner and wrinkle when we flew back to Greece.