Once again we got lucky with the weather: taking off from Iraklion we flew of the Greek Island and Albania back to Croatia where we just touched down in excellent weather. The enroute weather was good, only in Greece we flew over an overcast cloud layer at 14 000 feet for about one hour. Today's leg was the longest so far: thanks to a strong headwind it took us about 5 hours.

Our departure from Iraklion got a bit delayed due to administrative hurdles. Several times, they pointed out the the lack in staff as the reason for the issues. We were unable to verify this as every office was manned by at least four persons and for every task like refueling or driving us over the tarmac were executed by at least three employees. Our highlight was the taxi from the terminal to the handling agent's office: three handling agents drove in their Fiat at walking pace while we tried to follow behind carrying our luggage. 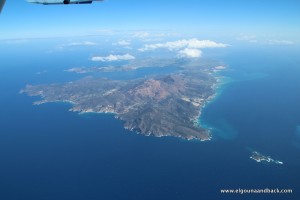 Paying our landing fees was not easy at all. The handling agent (a different one but almost as pretty) led us through a maze of marble floor hallways to a locked office with a Greek sign hanging on the door knob saying something like "I don't feel like working"). After about 15 minutes of communication via mobile and radio and the arrival of several officials, the responsible person finally arrived and invited us into his office. There he wanted to know a lot of things that he as airport official should know best (e.g. our arrival time the day before) which he entered into his DOS program and printed out using two dot matrix printers on forms with carbon copy. The end result of the exercise was a invoice about € 1.37 — due in cash and without change. Our handling agents then wanted another € 33 — in cash and without change. Normally it's the job of the handling agent to take care of such administrative tasks but — as mentioned before — they were short on staff. Refueling worked without any problems and even though we were told the amount was due in cash without change, they accepted our credit card.