Touch down Iraklion! Who would have thought that our plan worked out without a hitch! At an ungodly hour with the first sun rays we departed El Gouna on the Read Sea, heading north to the pyramids and "6th of October". Only there in Egypt you can find the special type of fuel that our aircraft requires. The landing was once again extremely windy with 30 knots (about 60kp/h, something we specialize in by now) but a real greaser. The fuel bowser was a bit oversized for our aircraft but after about half an hour we were ready for depature again and continued our journey north via the pyramids crossing Cairo and going to Port Said.

The following landing was one of the easiest, only olfactorily and visually complicated by the smoke of burning cars from the protests. Just in time for the Friday's Prayers after which — as you know from TV and radio — the riots start, we had passed immigration, talked to the airport manager, had tea with the immigration officer and thanked Ahmed for his great help during the whole trip. 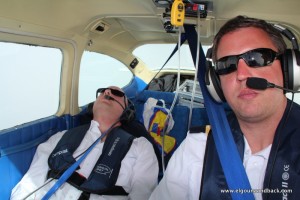 The flight plan which we had submitted did once more not arrive at the Egyptian air traffic control unit but even that was no issue and about 1.5 hours after our landing we were airborne again, heading north over the Med. We decided to divert to our alternate Iraklion to avoid another landing in Sitia with 60kp/h crosswinds.

The approach into Iraklion led us through layers of clouds and rather bad visibility (due to the southerly winds bringing loads of Sahara sand from Africa) and we were only able to see the runway when we were right above the threshold. Thanks to a nose dive we managed to land on the first attempt and after a lovely handling service (see pictures) we are now happily sitting in our hotel room and planning tomorrow's leg into the cold north.

2 thoughts on “Back on European soil”