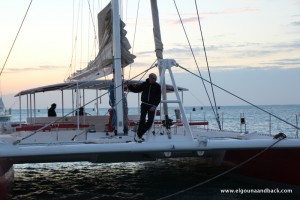 When two pros like Markus and Achim are in town, it doesn’t take long for difficult jobs to emerge. Yesterday it was about bringing Ocean Diva II, a 74 foot catamaran, from its previous harbor El Gouna to Port Ghalib (Marsa Alam), 120 nautical miles south.

Due to the revolution and the subsequent decline in tourism, OD II (as friends like to call her) spent some time alone in the harbor and therefore the trip was also a sea trial. 30 knots of tailwind and arrival at an unknown marina in the middle of the night promised an interesting trip.

Another goal was to try out Achim’s newly acquired trolling equipment. The latter was fully achieved: after about 15 minutes a 10kg thuna, two monster fish that first bent the rod and then went off with an aching jaw and last but not least a marvellous 20 kg dorade. Both were expertly cut by Khaled and served as the traditional welcome gift for the harbor employees. Achim — economist by profession — immediately determined the return on investment for his fishing gear (4 more fish) and we are currently working on our business plan as fishermen in Egypt. 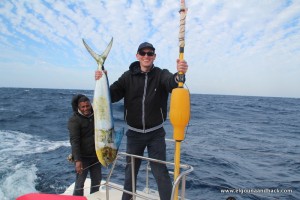 This trip was not for sissys (which is why Markus didn’t fully enjoy it) and there were a few challenges that made it more interesting:

All in all a successful trip. Today we are heading back to El Gouna in a car.

2 thoughts on “El Gouna to Marsa Alam at 8 knots”