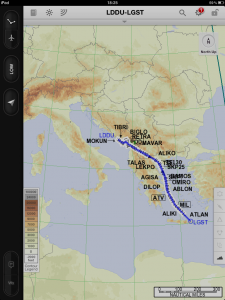 What a day! Splendid weather in Dubrovnik and everything turned out just like we had planned it. Our destination Sitia on Crete only opened at 12:30 UTC (14:30 Greek time) and only for a few hours. Nobody knows why, this is Africa… aehm no it's actually not. We didn't want to limit our options and planned our departure so that we would arrive exactly at the time of opening. We were prepared for quite a lot, having read all those horror stories by other pilots visiting Greece. Air traffic controllers that don't speak English, incompetence everywhere, less than optimal routing etc.

First we had to pass Albania and FYROM. We wouldn't want to park our aircraft in Albania but at 15 000 feet we felt quite safe. The Albanian controllers where top notch, just like at home. After that FYROM — Former Yugoslavian Republic of Macedonia — so the official name of this country. One could just say Macedonia but the Greek don't agree and like to veto in the EU because they have a little province with the same name. FYROM was a positive experience in every way: beautiful landscape and excellent air traffic control. They cared very well for us, suggesting shortcuts without being asked and asking more than once whether there's anything they can do for us.

Then we entered Greece and the suspension rose. One thing was very positive: all controllers had a good level of English, were friendly and supportive. However, this was in no way comparable to what we had so far on this trip. Our filed routing was — like always in Europe — rather indirect and none of the Greek controllers ever thought about suggesting shortcuts to optimize our flight. When asked for it, they (as with every request) said "standby, I call you back". After what felt like 10 minutes, we got our shortcut, hoorray! We had just burned 20 liters of fuel for no reason. Then it got bizarre: "D-EDGK, direct ATV VOR, maintain heading 140". Every IFR pilot will be perplexed: one should fly directly to the beacon ATV (Athens) while pointing the nose at 140°? What if a crosswind changes our course? Should we still fly 140° or correct so that we're still flying inbound the beacon? Three attempts for clarification did not present a solution: we were supposed to fly heading 140° while going directly to the beacon ATV. Maybe they move the beacon so that it matches? We then agreed that we let her talk and continued to fly inbound ATV.

Then the weather got interesting. We knew there would be clouds with large vertical extent and that we would have to steer left and right. However, it clearly looked like a good day to fly and this was true. We were scheduled for flight level 150 (5 kilometers) and then later had to climb until flight level 180 (6 km) to stay on top of most of the clouds and not have to constantly avoid them. We are instrument pilots and allowed to penetrate any sort of cloud on this planet (besides ash clouds) but those so called towering cumulus are quite wild, giving you a roller coaster ride and shaking up the contents of the cabin. Also I didn't want to hear Markus's constant whining. At flight level 180 one has to constantly monitor blood oxygen saturation and have a good plan of what to do should the oxygen system fail. Despite years of chain smoking (Markus), our saturation was constantly between 95-98%. That's truly excellent! 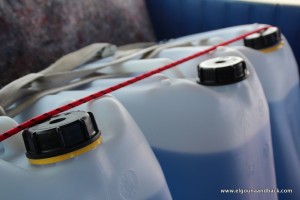 As we came closer to Sitia, we started calling the airfield to get a confirmation that it's really open. We were not successful even though we were flying very high. We started to get worried. Iraklion (our alternate) costs hundreds of Euros and does not have any fuel for us. When we asked the controllers, they told us the field is open and we shouldn't worry. Then we started to descend from 18 000 feet to 2 400 feet in rather short time and were lucky to get permission to do this as a visual maneuver so we could curve around as we pleased and avoid the nastiest clouds — by now we all know that Markus is a sissy. This was very nice of the controller as such a permission shouldn't be taken for granted thing when flying IFR. 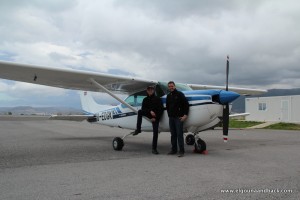 Now it was time for the approach into Sitia, VOR DME 23 for experts. The wind was horrible: 30 knots and at a 90 degree angle to the runway — it couldn't get worse! This is far beyond the airplane's certification and my experience as a pilot. We were expecting strong winds but nothing close to this and definitely not as a crosswind. Until a few years ago, Sitia had the perfect runway for this kind of wind but then they got hold of some EU funds and started building a new runway rotated by 90°. This definitely makes for interesting landings! We decided to land, given that our options were not much better with the same wind and we were convinced we would be able to do it, at least try. The landing was hard (2 jumps), I was very much afraid of the crosswind lifting one of the wings which would be disaster and therefore I used a so called crab approach (do not mix it up with the with the very frequent "crap approach") instead of the usually preferred low wing approach. In addition, I decided to perform the landing at a higher speed than normal because of the gusts and with 20° of flaps (instead of 40° as normal) to be less of a victim of the wind — especially with 120 liters of fuel in the cabin! The GoPro camera witnessed the landing. Until seeing that video, I was embarrassed by the landing and wanted to delete the video (so Markus won't be able to use it against me) but now that I've seen it I am rather proud. 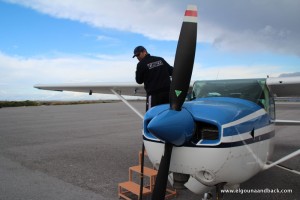 We got refueled at a bargain price of 3.20 € per liter, tied down the aircraft and entered Schengen again. The airport of Sitia is — interesting. A ramshackle hut but one could see that they were busy building a new terminal. They deserve it.

A taxi brought us to the best hotel in Stitia, at this time of the year very cheap. Very nice place here. Now we feel a strong urge for a beer and gyros, then we will make plans for Egypt.

By the way: Ahmed informed us today that he got the entry permissions for us just in time after a lot of problems. Hoorray and a million thanks to Ahmed!

2 thoughts on “Solid impact on Crete”